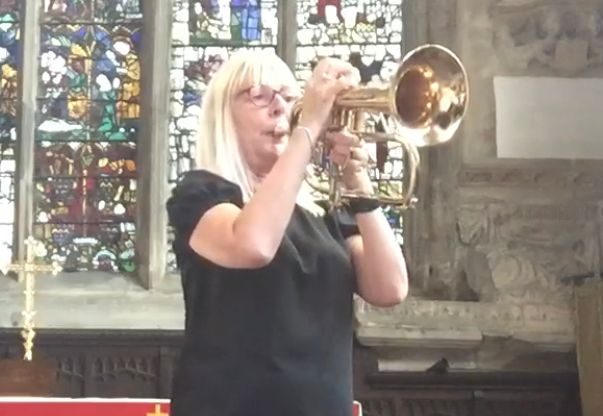 One of the many challenges that the GUS Band players and indeed all musicians around the world have faced during the recent lockdowns has been trying to stay motivated with their playing. With no concerts to prepare and no contests to build up to, it was all too easy to leave the instruments in their cases and let practice routines slip. As a band, several highly-successful videos were created with the masterful help of the Band’s Composer in Residence and Associate Music Consultant, Mike Sheppard, which went a long way to keeping morale high but one of the players went the extra mile to stay focused over the long months with no rehearsals. Like the character in the seasonal film, The Snowman, The GUS Band’s superstar Flugel virtuoso, Della Pearce, has been flying high over the past year.

What’s more, there is a chance to hear Della’s sublime playing in action at the Band’s forthcoming live performances of the Snowman at the Egerton Hall in Brackley, Northamptonshire. This magical film telling the story of the snowman that comes to life will be accompanied by The GUS Band who will be playing the music from the enchanting score by Howard Blake. There really is no better way to start the Christmas festivities and get you into the Yuletide mood than to sit back and enjoy this wonderful show.